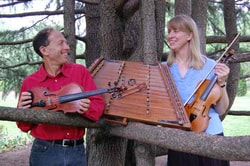 Ken Kolodner (hammered dulcimer, fiddle, hammered mbira) and National Scottish Fiddle Champion Elke Baker’s (fiddle, viola) approach to traditional music reflects both a deep respect for the tradition and a healthy spirit of creativity, as they effortlessly combine tremendous precision and musicality with a mastery of the improvisational freedom essential to traditional music.  After collaborating for many years in performance, including guest recording on each other’s CDs, Elke and Ken celebrate the completion of their first duo release Out of the Wood.  Hailing from the Baltimore area, National Scottish Fiddle Champion Elke Baker (fiddle and viola) and Ken Kolodner (hammered dulcimer, hammered mbira and fiddle) are widely known as masters of their instruments. Between them, they have recorded over 20 CDs and toured in every state in the U.S. and well-beyond. Called a "local treasure," (FSGW) Elke Baker's playing has been said to be a "rare delight," with "precise technical skill, and fulness of soul" (Celtic Beat) and capable "to make hearts bleed" (The Frederick News) while Ken’s playing has been described as “world class” (Sing Out!), "nothing short of astonishing" (The Connection), “outstanding” (The New York Times), “marvelous” (The Washington Post), “virtuosic” (Audio), “stunning in its musicality” (Dulcimer Player News) and “not to be missed” (USA TODAY). Elke and Ken perform a rich variety of Scottish, Quebecois and Irish music, original compositions, and refreshing, foot-stomping Old Time twin fiddling that'll bring the house down.

Elke Baker's Bio
Elke Baker is a U.S. National Scottish Fiddle Champion, “and it's easy to hear why”  (SingOut!). The Washington Post wrote, “Baker's fiddle nearly throws off sparks,” while Celtic Beat unequivocally stated, “for goodness sake, should Elke Baker appear in your area, make sure you attend one of her concerts!”  As a soloist and with Ken Kolodner, Terpsichore (with Liz Donaldson and Ralph Gordon) and many others, Elke has performed all over North America, Japan, Ireland, West Africa, and Scotland, as well as closer to home at the Birchmere (with Ken) and the Kennedy Center.  In addition to serving as Music Director of the Potomac Valley Scottish Fiddle Club since 1993, Elke has been a faculty member at the Washington Conservatory of Music and Artist-in-Residence at Montgomery College. The Washington Post was “impressed by the rhythmic energy and deep emotions that Baker generates with her bow”; and Gazette Papers predicted that “The surgeon general will slap the mandatory warning sign on her forehead: ‘Warning: Scottish fiddle playing can be addictive and cause toes to tap.’”  Elke’s playing has been described as “soulful”, “delightful” and “intriguing" (The Washington Post), “wonderful listening—highly recommended” (Scottish Fiddle News) and “some of the greatest Scottish music to be heard anywhere” (TACSound).   Praised as “a CD of rare delight, precise technical skill, and fullness of soul” (Celtic Beat), her Over the Border CD was featured in the soundtrack of the movie The Boyhood of John Muir. Elke’s most recent recording withKen Kolodner is Out of the Wood.  www.elkebaker.com

“I’ve admired Elke Baker’s playing for many years. Elke is a great listener who plays with an energy and musicality matched only by her love and respect of traditional music. Living in the same area, I have been fortunate to perform with Elke for 15 years or so. We come from different traditional music backgrounds which makes playing together very exciting. Often after a performance, we would inevitably discuss recording together one of these days. ‘One of these days’ has finally arrived!”
-- Ken Kolodner

“I first met Ken Kolodner at a festival in Baltimore in the 1990’s.  I was immediately impressed by the depth of Ken’s musicality and the range of expression he has with the dulcimer.  Ken’s playing challenges me to think about bass lines and chords, countermelodies and rhythms.  Our repertoires overlap enough to make it easy to find common ground, and differ enough to introduce me to a vast landscape of fresh musical styles that I’ve always wanted to learn more about.”
-- Elke Baker